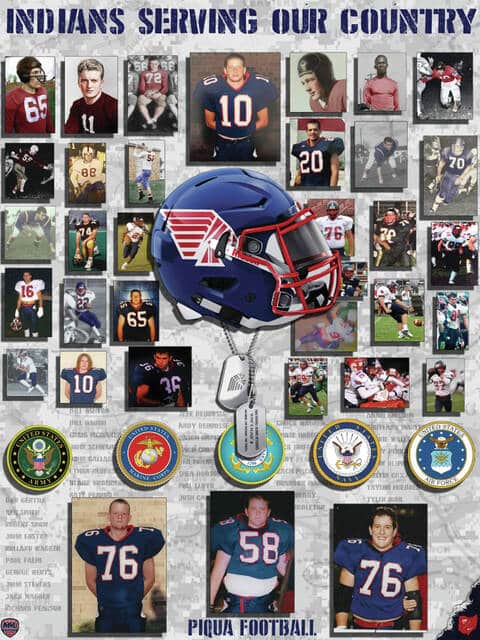 Piqua has always made sure to honor and thank its veterans for their service.

So, it is no surprise Friday night is Veteran’s Night as Xenia visits Piqua football in MVL action at Alexander Stadium/Purk Field.

And it would be hard to find a family with a stronger connection to both the Piqua High School football program and the military then the Underwood family.

Blaise, Dash and Chase Underwood all went on to serve in the military after playing for Piqua football coach Bill Nees.

“They were not just good football players,” Nees said. “They were outstanding students and representatives of Piqua High School.”

He was an offensive tackle for the Indians and immediately upon graduation he joined the Army National Guard and served from 1998-2006.

Underwood was involved in Operation Freedom and Operation Katrina Relief.

He went on to become an attorney and works at the firm Rose and Dobbins Co. L.P.A. in Wilmington.

And one memory stands out for him from his high school football career.

He played along side Sam Pearson, who died in Iraq in 2007 while in active service.

“My highlight is retrospective highlight,” Underwood said. “It was lining up and playing every down with Sam Pearson. All things considered, what an honor.”

He played on the last team to go 10-0 in the regular season, which was the final season at Wertz Stadium.

Underwood was an offensive tackle, who has served in the Army from 1999-present. He is a Blackhawk Helicopter pilot, who actually went to basic training between his junior and senior years.

“I didn’t take my studies in high school serious enough to get an academic scholarship and I wasn’t going to get an athletic scholarship — so, it was a way to get my college education paid for and my mom wasn’t burdened with it.”

Underwood also said he had an advantage at Basic Training.

“I went to basic training between my junior and senior years,” Underwood said. “The thing I remember was how easy basic training was compare to a Bill Nees conditioning program, after having gone through it for three years at that point. I just remember how much easier it was for me than the guys standing to the left and right of me.”

“I think the way it prepared me for the military was the way the team is only as successful as each person. That if one person misses their block, that can ruin the whole play. One Buffalo can ruin it for the whole heard. Those concepts are what helped me in the military.”

And it is no surprise to him to see PHS honoring the veterans.

“It doesn’t surprise me that Piqua is honoring the veterans,” he said. “Piqua has always been really good about that, especially with Sam Pearson. As far as the interest they are taking in me and my brothers, that is very humbling.”

He dressed on the Piqua state runnerup team in 2000 and started for three years, playing in the first game at Alexander Stadium/Purk Field.

Unlike his brothers, he did not go immediately into the military, serving in the National Guard from 2006-2012.

“For my brothers, they went into the military right away,” Underwood said. “For me, it was something happened later in life after some humbling.”

Underwood has nothing but great memories during his time as a Piqua Indian.

“It was a great experience being part of the Piqua football program,” Underwood said. “All the team work, team building and bonding and all those things. I still am in contact with a lot of the players I played with. “

Underwood said playing on the football team was perfect preparation for the military.

“Absolutely, all the team work and all those things I learned with Piqua football helped me with the military,”It is the same king of thing. A lot of team work and learning you don’t have to do everything on your own.”

“My life turned out great. I am working in law enforcement,” Underwood said. “I couldn’t have asked for anything more. “

Just like Piqua High School and the community couldn’t ask anything more from the Underwood family and all the veterans and is happy to have the opportunity to thank them for the service.