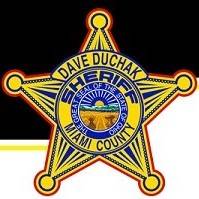 CRIMINAL DAMAGE: A deputy responded to the 6800 block of Singer Road in Bethel Township in reference to a theft complaint at approximately 7:30 a.m. The incident was determined to be a criminal damaging complaint. A report was documented as the victim requested.

DRUG OFFENSE: A detective responded to the Miami County Jail in reference to an inmate possessing narcotics inside the jail at 10:15 a.m.

THEFT: At approximately 10:21 a.m., a deputy responded to a report of a theft of a credit card and two gift cards that occurred on May 17 at Upper Valley Medical Center. The victim wanted the incident documented. There are no suspects at this time.

ANIMAL COMPLAINT: A deputy was dispatched to the area of Sullivan and Ross roads in Bethel Township in reference to a brindle colored, pit bull mixed breed running loose at approximately 6:15 p.m. Prior to my arrival, a subject saw the dog as she was driving by, and she stopped, took control of it, and placed it in her vehicle. The subject stated she had no problem housing the dog at her home for the night. She stated she would escort the dog to the animal shelter the next day.

CRIMINAL DAMAGE: A deputy was dispatched to the 100 block of Knollwood Drive in Staunton Township in reference to a criminal damage complaint. Upon further investigation, it was found that the reporting party wanted to document that his mailbox had been struck at an unknown time.

BURGLARY: A deputy was dispatched to the 100 block of Walnut Street in Ludlow Falls in reference to a burglary complaint at approximately 8:40 p.m. This case is pending further investigation.

CRIMINAL DAMAGE: A deputy responded to the 200 block of Nill Street in Bradford on a criminal damaging complaint at approximately 7:45 a.m. The reporting party advised an unknown subject had put ketchup and mustard on their garage and camper. They requested the incident be documented in case of future occurrences. A similar report of criminal damage was also made on the 200 block of North High Street in Bradford at 8:30 a.m.

PRISONER TRANSPORT: A deputy responded to Kroger on Northwoods Blvd. in reference to Butler Township Police having custody of a male with an active warrant out of Miami County for abandoning animals. The male was taken into custody and transported to the Miami County Jail without incident.