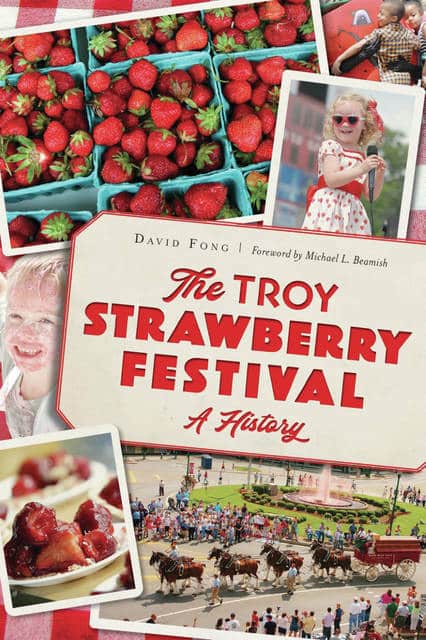 TROY — While the Strawberry Festival may not be coming to Troy in full force this year, readers around the county can learn about the history and the local impact of the festival in a new book.

That first festival that kicked off the summer of 1977 in Troy and would become a sign of summer coming back around year after year not only boasted perfect weather but around 10,000 people in attendance. Over the next 40 years, the festival and the number of people attending would grow, culminating in more than 150,000 flocking to it in 2019. One thing that has stayed consistent since the beginning is the focus on local organizations.

“It does so much for the people of Troy, not just in terms of entertainment, but also in terms of the nonprofits that benefit from the Strawberry Festival,” Fong said. “It’s a chance for people to give back to the nonprofits while having a lot of fun. It’s just a chance for Troy to open up and show what small-town values are like.”

Organizations such as the Troy Music Boosters — whose famous strawberry doughnuts have a whole chapter devoted to the history, process, and long lines that sometimes have attendees waiting hours for the confection that only comes around once a year in Troy — make the majority of their funding for the year from the Strawberry Festival.

Writing the book was a learning process for Fong, who was 4 years old when the first Strawberry Festival popped up in the city and has attended every year since, give or take a couple in college. He found himself pouring over old articles from archives of the Troy Daily News and the Miami Valley Today, thanks in part to Troy librarians Rachelle Via and Patrick Kennedy, who let him conduct this research during the start of the pandemic. He spoke to Kay Hamilton and Joyce Fulton, widows of the two men instrumental in starting the beloved festival: Steve Hamilton and Bill Fulton. He also took to social media, asking people to share their memories of the Strawberry Festival from over the decades. He takes pride in getting every personal account that was shared into the book.

“I said, ‘this isn’t my book. This is the city of Troy’s book, this is the Strawberry Festival’s book. I don’t want this to just be a recap of the history.’ I got dozens of responses from people because people love the festival and they have fond memories of the festival,” Fong said. “I wanted this book to be for and about the people of Troy, and the people who have been involved with the Strawberry Festival over the years.”

While the full festival won’t be coming to Troy in 2021, the city has put together a smaller-scale version of the event. The Strawberry Jam is set for Friday, June 4, and Saturday, June 5, and will feature food and music. More details for the event are still pending, but the city hopes the full festival will return in 2022. For Fong, he hopes the absence of the festival in Troy will ultimately make the heart grow fonder.

“I’m glad to see that they’re doing something to give people the flavor of the festival. My sincerest hope is that, in absence of the festival, people will read this book so they can bring back the memories they have and keep the festival in their minds, and hopefully when it comes back in 2022, absence makes the heart grow fonder and they’ll be doing everything they can to get there because they missed it so much,” Fong said.

“The Troy Strawberry Festival: A History” will be available to readers on April 19. To purchase a copy of the book, an order form can be found at www.facebook.com/authordavidfong or Fong can be emailed directly at authordavidfong@gmail.com.