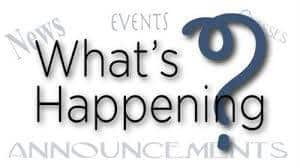 This will be a temporary service through the end of the calendar year to help those struggling as a result of the pandemic.

The Food for Fines campaign will continue through the year, offering patrons a chance to eliminate their fees associated with lost items. Each non-perishable item will eliminate $1 from your replacement costs. We will waive fees for one lost item per month. All food collected is taken to the Bradford Resource Center and will be distributed to Bradford residents in need.

MIAMI COUNTY — The Miami County YMCA is offering youth flag football leagues for 4-5 year olds, kindergarten to second graders, and third to sixth graders. These leagues incorporate the fundamentals of football with coaches serving as quarterbacks for the younger leagues and the players quarterbacking at the third to sixth-grade level.

The leagues are held on Sunday afternoons beginning April 11 at the Robinson Branch in Troy, with start times ranging from 1:45-4:15 p.m.

The 4-5-year-old program is an introductory program giving all participants a chance to run and catch the ball each half, then building to downs as the season progresses. Parent participation will be needed and this program gives parents a great way to spend time with their child on a Sunday afternoon.

Parent coaches are always needed and can sign up as a coach during registration. All coaches receive a T-shirt and find themselves in the game with their children having fun and teaching the game of football. A coaches meeting will be held at 6 p.m. March 30 at the Robinson branch and all coaches signing up are encouraged to attend.

Registration is going on now at either Branch or over the phone at the Robinson Branch at (937) 440-9622. The cost for participation is $37 for YMCA members and $70 for non-members. For more information, contact Imari Witten at (937) 440-9622 or i.witten@miamicountyymca.net.