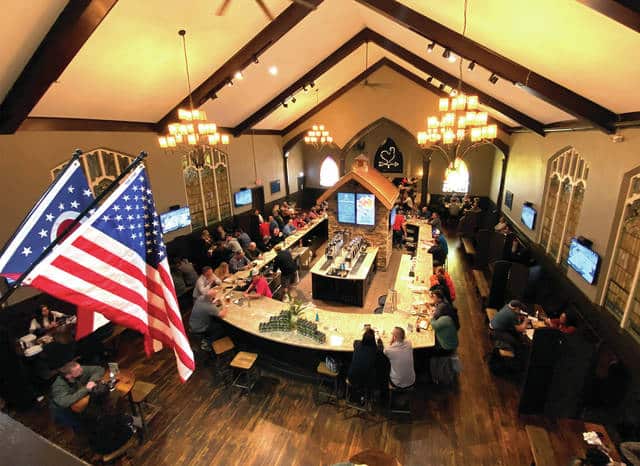 TROY — It’s been two weeks since the overnight curfew expired, and for local bars and restaurants in the area, the return to somewhat normal nights has been refreshing for owners and staff.

“We’re fortunate to have made it through all of this and still be open and up and running as a brewery and a restaurant, but it’s definitely helped and it’s been really good to see the community get back out there and still feel safe and comfortable in our restaurant environment,” Jess Nielsen, brand representative for Moeller Brew Barn in Troy, said.

Moeller Brew Barn is one of several bars in the area affected by the 10 p.m. curfew that was originally put in place in November and moved back to 11 p.m. at the end of January. According to Nielsen, the table turnover was low; while customers would normally have a drink with dinner and hang around for a few more after their meal, the curfew meant customers were staying less to give themselves time to get home.

“That was exciting, it was an opportunity where we had both sides of the business; we had the in-sales, in person at the taprooms, but we had the other option for people to enjoy our product line at their home or wherever they were and feel comfortable with a six-pack,” Nielsen said.

Even with the curfew lifting in the middle of winter when beer sales are slow, Nielsen said that there has been an increase in sales at Moeller Brew Barn, and that they’re looking forward to providing St. Patrick’s Day festivities to their customers as March approaches.

“For the St. Patty’s Day Weekend (March 12 and 13), we’re having a big St. Patty’s Day celebration where we will have an outdoor heated tent in our beer garden. It provides people with another option to be together and be celebrating together, but outside and safe within the restrictions that are on us right now,” Nielsen said.

Chaffee’s Brewhouse, located in downtown Tipp City, experienced a similar low turnover when the curfew was in place. Shawn Richards, who co-owns the restaurant with his wife, Lisa, said that they noticed their dinner rush died down by 8 p.m. because customers wanted to give themselves enough time to get home before curfew. They also missed out on hosting holiday parties for patrons through November and December due to the curfew. Since the curfew lifted, Richards said they’ve had an 80 percent increase in business.

“It’s a bit jovial, is the best way I can describe it. People are happy to be out and about again, and we see that. It’s a fun atmosphere again, and it’s good to see people out,” Richards said.

While Gov. DeWine let the curfew expire on Feb. 11, he said during the press conference that “we may, in the future, have to put a curfew back on” if Ohio experiences a spike in cases. Even though a curfew reinstatement would be a step backward, Richards said that if that were to happen in spring or summer, the warm weather would help offset a decrease in business.

“We’ll take it how it goes and adjust accordingly,” Richards said. “Our hours are 10 p.m., we didn’t plan on being open longer than that, so as long as the mentality of the people doesn’t change with the curfew, it shouldn’t affect us that much.”

While restaurants like Chaffee’s Brewhouse and Moeller Brew Barn are hopeful that they won’t suffer significantly with another curfew in place, businesses like 311 Drafthouse in Piqua aren’t as lucky.

“To be very honest, my business was impacted almost 40 percent last year. So, another 40 percent drop in revenue in the year 2021 means there won’t be a 311 Drafthouse, which I’m not comfortable with, and I don’t ever want to see happen,” Tom Elliott, owner of 311 Drafthouse, said.

While the curfew had impacted the topline business of 311 Drafthouse, another challenge for Elliott has come in the form of being short-staffed. Currently, he is still closing at 10 p.m. to accommodate staffing issues and is still looking for at least two additional servers and three kitchen staff members in order to be able to fully open to the public.

“With the hours that we’re open, business is fairly strong; (however), not having enough help, I’ve got girls that are working doubles that would not normally work doubles, and 12 p.m. to 12 a.m. is a long shift,” Elliott said.

Despite the staffing issues and the hit business took between shutdowns and the curfew, Elliott said that customers have been understanding.

“I would like to thank all of the loyal patrons of 311 Drafthouse through this whole process. They have been fantastic and fabulous working with us when we have issues. I want to thank Piqua and our patrons because they’ve just been great,” Elliott said.