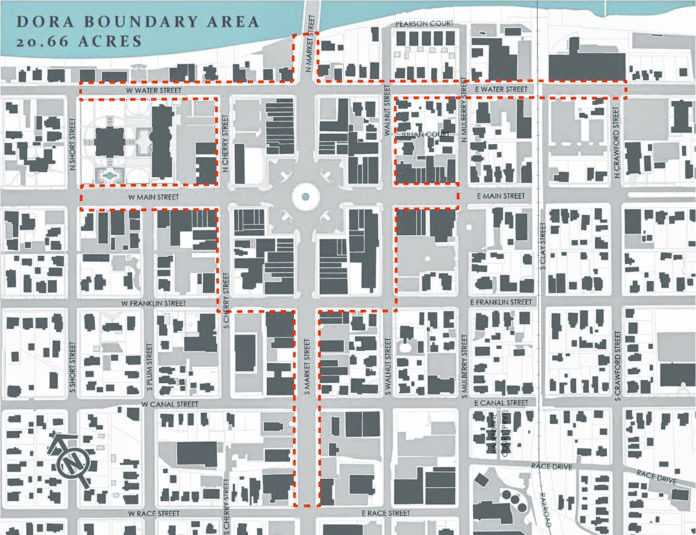 TROY — The city of Troy is revisiting adding a Designated Outdoor Refreshment Area (DORA) to downtown Troy with a city council work session scheduled at 6 p.m. Feb. 8 at the Hobart Arena’s Bravo Room.

The second proposal of the DORA is 20.6 acres. Qualified permit holders would be the former Brewery, the Elks, The Redmen Club, Harens’ Market, Mojos Bar and Grille, Agave and Rye, Leaf and Vine, The Caroline, Studio 14 Creative Arts Center, The Submarine House, Moeller Brew Barn, Basils on Market, Tokyo Peking, and the One Stop Drive-Thru. the former site of the Little York Tavern is also included in the proposed district.

Public comments will be fielded at this meeting and at the committee meeting held Feb. 22 and at its first reading on March 1. If all legislation follows the proposed timeline, the DORA could be implemented as soon as April 15.

The second proposal narrowed down its hours to noon to 10 p.m. on Thursdays, Fridays and Saturdays. The alcoholic beverages purchased with the official cup can be consumed outdoors within the DORA and only during official DORA hours. Beverages can be purchased at one location, but can not be carried into another establishment. Non-liquor establishments may permit or prohibit DORA beverages in their stores at their own discretion. The permit must be re-certified every five years, but the city proposes it will reevaluate the DORA at the end of 2021 if accepted.

Approximately 56 Ohio communities have established a DORA since 2015, including Bellefontaine, Dayton, Fairborn, Greenville, Marysville, Middletown, Sidney, Tipp City and Wilmington. The average size of a DORA district is 51 acres and 84 percent of all DORAs in Ohio open its DORA throughout the entire week, although Troy is only proposing the weekends.

On Aug. 17, Troy City Council voted down the proposed Designated Outdoor Refreshment Area. Troy first DORA had the proposed hours of 5 p.m. to midnight Wednesday-Friday and noon to midnight Saturday and Sunday. The city of Troy reduced the size of the first proposed DORA from 41 acres down to 21 acres and focused on the downtown area. The first proposed DORA district was not supported by Troy City Council’s Health and Safety Committee. Council member at-large Zachary Allen was the lone yes vote for the DORA. Council members expressed their concerns with the consistency of days and hours of the DORA and if it would have a positive impact on local businesses.

Troy residents expressed their concerns with trash, coronavirus spread, intoxicated patrons inside businesses, and damage to the city’s family-friendly downtown atmosphere. Several residents thanked the council for voting the DORA down at the public comment portion of the meeting following their vote to not implement the district.